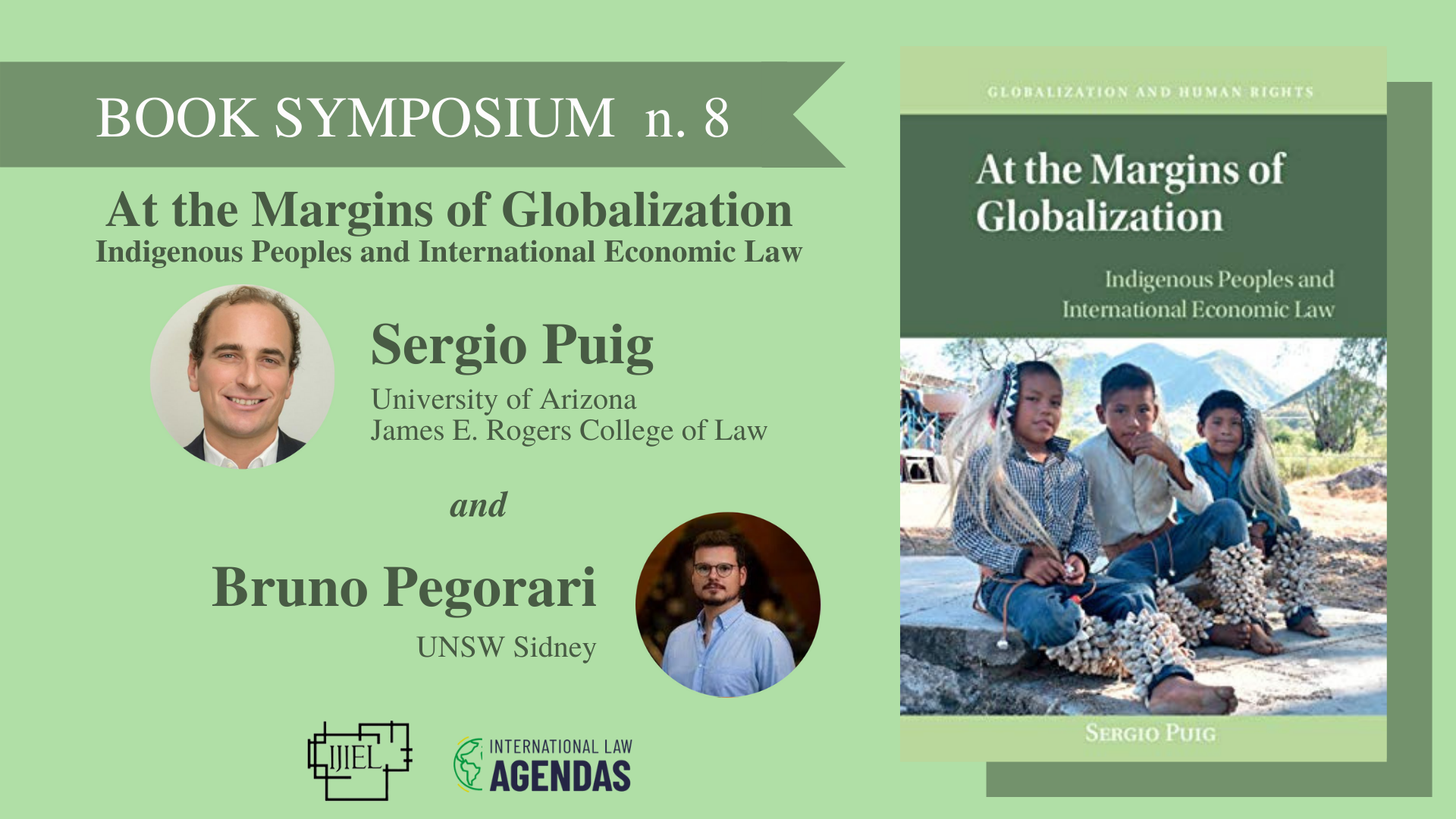 Until very recently, little was written on the intersection between Indigenous peoples rights (IPR) and international economic law (IEL) – let alone a more substantial monographic work. Sergio Puig’s new book, At the Margins of Globalisation: Indigenous Peoples and International Economic Law, not only helps to fill that gap by unprecedently organising the normative and institutional components that give legal shape and content to the IPR-IEL intersection but goes further (and bolder). In his book, Puig claims that the legal arrangement of and practice within the IPR-IEL intersection substantiates an International Indigenous Economic Law (IIEL). Thus, the book adds to a (hopefully growing) trend in international law scholarship over the last few years that identifies, organises, and promotes the development of Indigenous peoples rights and interests within other-than-human-rights bodies and regimes of (international) law.

Since the 1970s, and taking advantage of the Third World decolonisation movement, alliances of Indigenous peoples began to carve out a place within international law. The strong language of self-determination informed Indigenous peoples’ initial diplomatic incursions and shaped their earlier legal claims. At this stage, an emerging international Indigenous peoples’ movement not only abstained from deploying human rights (HR) language but largely disapproved of its Western-centric, individualistic traits. However, while states resolutely opposed Indigenous peoples’ claims for external self-determination in the 1980s, Indigenous peoples took advantage of more favourable institutional conditions at the UN to begin a long-term generative engagement with the human rights framework and institutions that would later result in the adoption of the 2007 UN Declaration on the Rights of Indigenous Peoples (UNDRIP). Yet, Indigenous peoples’ prolific (but also turbulent) relationship with international law should not be constrained to human rights. Without downplaying the extraordinary achievements under the HR umbrella, this relationship should be perceived as historically contingent, fluid, productive, and pragmatic. Although At the Margins of Globalisation does not engage in much detail with the history of these different modes of interaction, the book’s gravitational shift from human rights to international economic law brings an essential contribution to it.

Concretely, At the Margins organises Indigenous rights’ dynamics and operations within the institutional/normative structure of the main four IEL bodies of law: intellectual property, trade, investment, and finance.  Worthy of attention is how Indigenous interests and rights operates through exceptions in trade and investment regimes. In contrast, finance and intellectual property regimes address Indigenous concerns “by expanding participation and recognising mechanisms for direct benefits of productive activities” (p. 119-20). If, in the first case, Indigenous advocates can count on “more legalised systems of enforcement”, in the second one, they are destined to face ‘weaker’ systems. The book makes another fundamental distinction. First, IEL can work as a shield to protect Indigenous peoples against undesired/detrimental market forces; alternatively, it can function as a sword for developing Indigenous economic rights and interests (Chapter 5 and 6). By mapping IEL’s dynamics and processes, and pinpointing pathways for improvement (Chapter 7), At the Margins of Globalization offers, on the one hand, a comprehensive practical guide for Indigenous peoples’ advocates and human rights lawyers in general to build more effective advocacy/litigation strategies within IEL institutions. On the other, it offers international economic lawyers a better understanding of the uniqueness of Indigenous peoples’ rights and how to better address them within IEL institutions.

As highlighted above, At the Margins of Globalization conceptualises International Indigenous Economic Law as an ‘emerging field’. It is not clear, however, if this terminology only describes the intersection between IPR and IEL or if it pursues the more ambitious goal of conceptualising an emerging international legal regime. In any case, the book describes IIEL, among other things, as “one that focuses on the vulnerable and marginalised” and that “can provide a limited yet important pathway for improving the unequal distribution of the benefits of globalisation” (p. 104). Highlighting Indigenous peoples’ vulnerabilities (especially economic marginalisation) is critical. Nonetheless, this alone should not set the boundaries of an IIEL – both as legal discipline and practice. It is indispensable that an IIEL encourages Indigenous peoples to pursue their own development projects (UNDRIP Article 3) instead of drawing upon a single model. Just as human rights may have over essentialised Indigenous peoples through culture in order to set the boundaries of their rights to the detriment of their development possibilities (as Karen Engle has convincingly argued), IEL runs the risk of over marginalising Indigenous subjects at the expense of ignoring their cultural distinctiveness. This essentialising movement should be discouraged in the same critical fashion that the book points out the flaws of international environmental law when over naturalising Indigenous subjects as inherent “guardians of the environment” (Chapter 2). To reach a good balance between Indigenous cultures and development, we should question the very conditions upon which an IIEL genuinely oriented towards Indigenous rights and interests is built.

This means refraining from assuming that Indigenous peoples are automatically marginalised (and poor, and vulnerable). They may not (always) be. Nonetheless a valuable framing for distributional debates, this automatic characterisation fixes Indigenous peoples as “lesser” subjects and collectives, at the bottom of the capitalist development scale. According to this linear perspective, Indigenous peoples are stuck in the role of  “archaic lumps in the body politic, in need of modernisation and integration,” and thus deemed as “‘less advanced’ than other sectors of national society,” as Douglas Sanders articulated a while back. Although the book does not explicitly endorse a single mode of development, it leaves the development debate unchallenged, which may unintendedly attach the most varied Indigenous peoples to the strings of a single development model in which they are situated at the bottom. If this over marginalisation can be beneficial in some cases, it can trigger untinted consequences in others. For instance, it can misrepresent Indigenous peoples’ developmental distinctiveness before IEL institutions or worse. It can amount to the highly problematic practices of assimilation/integration law and policy – historically promoted by international law (see Anghie and Rodríguez-Piñero).

Indigenous peoples may not be willing to sustain their economic subsistence through a capitalist market economy. In many cases, they want to stay out of it altogether. In others, they may want to condition their economic interaction to cultural values. As such, they may limit what kind and how much market is to be allowed in. Think of the Javari Valley’s Indigenous peoples in voluntary isolation (Brazil-Peru border) that, despite facing immense pressure from missionaries, gold prospectors and farmers to “benefit” from Christianity, civilisation, and development, have repeatedly decided not to get involved. In this case, are these groups still poor, marginalised? Should the same economic indicators measure them? From an Indigenous rights perspective, freely determining what type of development each Indigenous people/group is interested in pursuing is an entitlement provided by their customary right to self-determination (UNDRIP Article 3). To prevent IEL from hindering Indigenous peoples own economic self-determination and ensure an IIEL genuinely oriented towards Indigenous interests, I propose scholars be mindful of the following two points of concern.

The first, widely addressed in the book and enshrined in UNDRIP Article 41, is the urgent need to enhance Indigenous participatory rights in IEL’s decision-making processes, through which Indigenous voices can co-produce new norms but also propel existing ones through the many windows in all four IEL regimes where an Indigenous-rights-and-interests-oriented application and interpretation of secondary rules of international law can thrive.

Secondly, to ensure an IIEL genuinely oriented towards Indigenous rights and interests, IEL should take Indigenous epistemologies and emancipatory discourses seriously. This means reading/listening/citing Indigenous scholars and genuinely engaging with their thoughts. As such, I would add, resistance should not only come “from within” (p. 141) the system, thus limited by its constraints and blind spots. It should also be sought at “the outside”, at its margins. In this way, we could think of Indigenous peoples’ engagements with IEL beyond mediated, proceduralised participation and beyond the transposition of human rights-framed Indigenous rights to IEL. In short, we should be more interested in indigenising IEL than accommodating Indigenous peoples as another thematic subgroup within IEL. To achieve that, we should draw from epistemologically diverse Indigenous worldviews able to promote meaningful change at IEL’s very foundations. Of course, this calls for a more in-depth, qualitative scholarly approach to the interaction(s) between Indigenous peoples and IEL norms and institutions in their multiple legal, geographical, historical, epistemic, and political backdrops. One that is yet to come (hopefully, soon) and will largely benefit from the solid foundations laid out by Sergio Puig’s sophisticated book.

Overall, Puig has made an unparalleled scholarly contribution to the development of Indigenous peoples’ rights within IEL and international law more broadly. For the first time, many of the legal developments once scattered about distinct international economic institutions and legal regimes have now been organised and began to make sense under the single umbrella of IEL. This systematisation adds a unique comparative advantage (between IEL norms and institutions themselves) to the debate. Puig’s in-depth knowledge of IEL and vast experience as an international economic lawyer is noticeable on every page. From beginning to end, the book provides detailed examinations of the tendencies, biases, and strengths of existing IEL norms, cases, processes, and institutions that will equip the reader with the necessary knowledge to advance the field both scholarly and on the ground. Thus, the book’s substantial and edifying contribution to the IPR-IEL intersection makes it mandatory for academics and practitioners alike. Overall, At the Margins of Globalisation is an authentic (and more than needed) invitation for the development of a genuine International Indigenous Economic Law (IIEL). 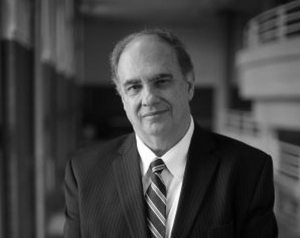 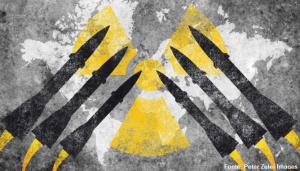 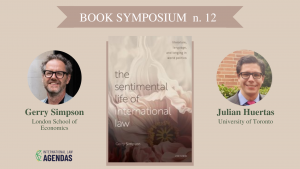