Enriching the debate while skirting some dilemmas? 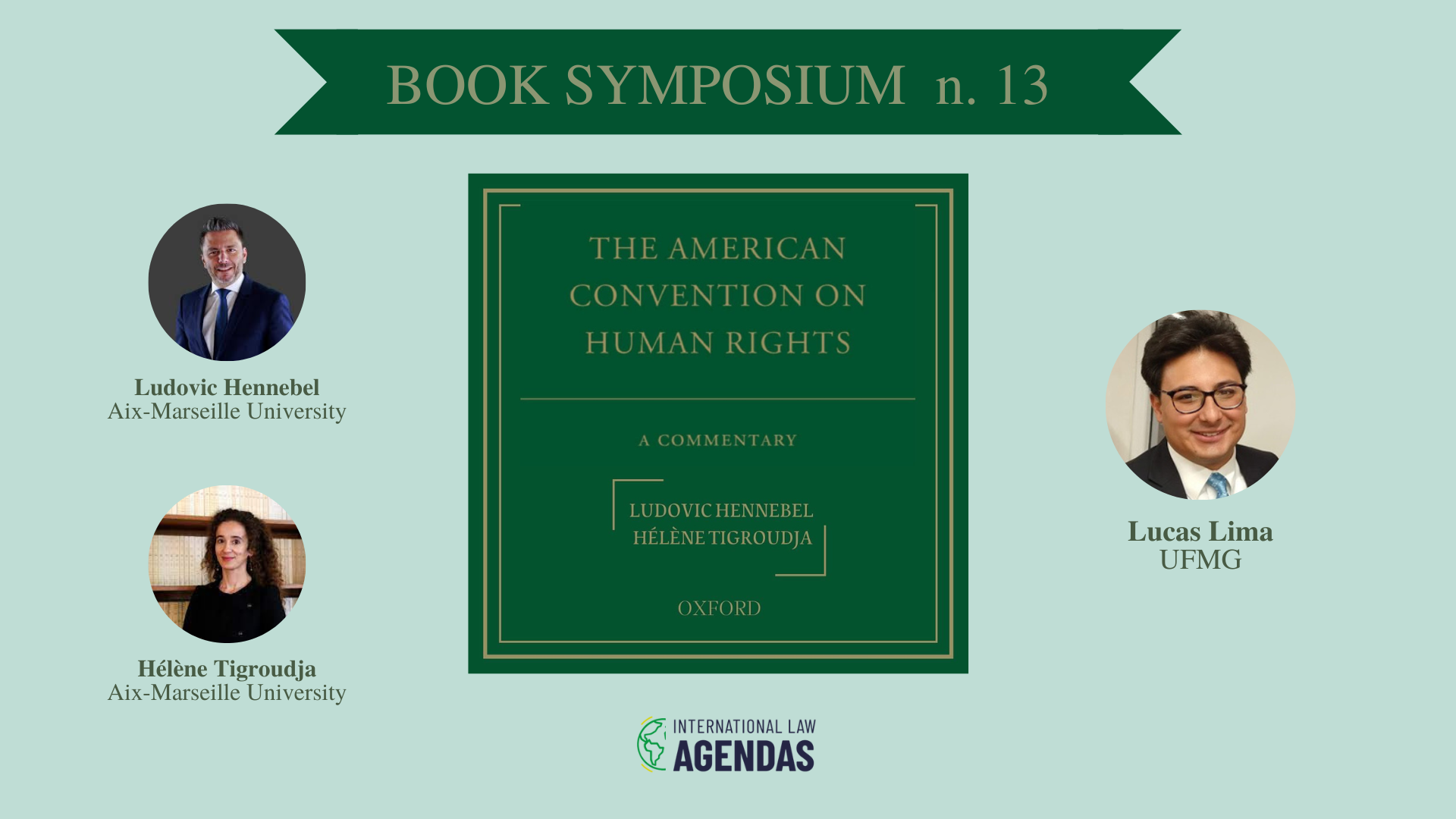 Commentaries to the American Convention on Human Rights are not rare products in the publishing world, in different languages and formats. In force since July 18, 1978, the Convention obliging states to respect human rights in the American continent approaches its 45 years of practice and dialogue with different communities in the region. Despite different levels of engagement with the Convention, national legal traditions across the Americas are more or less accustomed to the role that the Convention has within their legal systems. However, the commentary thoughtfully prepared by professors Ludovic Hennebel and Hélène Tigroudja offers a work of great breadth that unquestionably adds to the existing literature. It is an extremely authoritative commentary. Scholars and practitioners alike will benefit from this volume. Additionally, the beautiful preface by the former president and judge Elizabeth Odio Benito is a gift that further enriches the work, offering a uniquely precise and characteristically insightful immersion in the current problems through which the Inter-American Court of Human Rights, the ultimate interpreter of the American Convention, is going. To react to such a precious book, I decide to grapple with two of the system’s dilemmas the authors seem to skirt (or at least apparently avoid tackling them): the different theoretical debate on the perception of the system and the judicialization of economic, social, cultural and environmental rights (ESCER).

As a  commentary by only two authors, it inevitably offers an organicity that none of the previous works (for the most part edited) seemed to possess. There are no unnecessary repetitions; instead, there are helpful indications to where in another part of the work a certain argument can be found. In short, it is a work in which the time and care taken in its preparation and in the background idea that it carries can be noted.

The book has at least these two great strengths that testify to its high quality. In what follows, though, I will try to outline two criticisms to push further some debates raised by the book.

One of the high points of the book has to do with the authors’ background and their rich experience in the field of human rights beyond the inter-American system. The book is full of references to the practice of other committees, distinct treaties, or European experiences. The comparison, as made by the authors, always seems on point for the construction of a certain argument. This can be seen in the commentary on Article 12 of the American Convention (Freedom of Conscience and Religion) and in the different comparative approaches and problems faced by the European Court of Human Rights. Since the Inter-American Court itself is usually particularly open to the jurisprudence of other courts and other sources of international human rights law, the comparative exercise conducted by the authors seems particularly useful to scholars dedicated to the Inter-American Court. Beyond the attention to the European and sometimes African jurisprudence, extremely rich are the references to the general comments and decisions of United Nations treaty bodies of which, for obvious reasons, the authors are well aware. If, on the one hand, there are those who can argue that the comparison can take the focus away from the interpretation of the article in question as applied by the Court, on the other hand, it seems to fulfil the very notion of a ‘living instrument’ that interacts with other international legal systems. The problem, which perhaps deserved some clarification from the authors, is the criteria for establishing a dialogue among different sources.

The second great quality of the book is the depth of the innovative historical research that is carried out in relation to each article. This approach is not commonly found in research conducted in the region when dealing with the reasons for certain choices made the drafters of the Convention. Thus, the commentary also becomes a useful tool for future research to understand the historical processes of formation of the treaty, its contingencies, and the very perception of human rights by stakeholders in the continent. In this sense, there seems to be a large field for historiography of international human rights law to be explored. The rich research conducted by the authors in this commentary may inspire further scholarship not strictly related to more pragmatic work on the Convention, but equally sociological, theoretical, and critical on the system.

Other strengths could be highlighted in this work, but they were certainly pointed out by the other reviewers of this book symposium.

Such a complete work aimed at a deep understanding of the American Convention seems to obliquely face a problem about the different groups of academics who have theoretical aspirations or agendas in relation to the system. If at times it is possible to notice elements of constitutionalist readings, of purely internationalist interpretations, of perceptions of the Court as a transnational body, and even references to the doctrine of ‘transformative potential’ and the ius constitutionale commune, the authors do so only indirectly, without taking a definitive position on their own perception of how to understand the Court. It can be understood that this is an article-by-article commentary but, at the same time, the impression remains that the authors shy away from taking a position on more delicate and complex issues that today animate certain scholarly debates. For instance, when dealing with Article 2 of the Convention, the authors observe that “Although [the Court’s] approach [regarding national legal orders] has been severely criticized as ‘illiberal and anti-democratic’, it is also obvious that the jurisprudence on Article 2 plays a significant role in the transformative potential of the ACHR within the domestic systems of the States Parties” (p. 98). One can argue that these different perspectives are not always reconcilable, and they might have a weight on how the Court should conduct its work in the following years. At the end of the day, in the author’s view, are the theoretical lens that prevail or should prevail?

When commenting on article 26 of the Convention, the authors are called upon to address one of the most complex problems of the Inter-American Court’s recent jurisprudence, which is the use of the article on progressive development to judicialize economic, social, cultural and environmental rights (ESCER). As the authors themselves recognize, it is an act of will of the Court, and not of the states that created the Convention, to address this problem. In the words of the authors “the Inter-American Court has chosen to develop the normative protection of Article 26, which presently offers greater substantive protection than the Protocol of San Salvador. By including the right to work, the right to health, and the right to the environment in the scope of Article 26 of the ACHR, the Inter-American Court gives the economic, cultural, and social rights under the ACHR greater protection and development prospects than those offered by the Protocol.”

The authors seem to adhere to the Court’s idea that economic, social and cultural rights, combined with interpretations of the principle of progressivity and the principle of non-regression, impose an obligation on states to protect, promote, and fulfil ESCER. Yet, the issue is not resolved solely by the recognition of these rights – very well reconstructed by the authors – but by the consent of states to the Court’s jurisdiction. The reconstruction and identification of all the occasions in which the Court made use of article 26 to decide on rights not originally provided for in the Convention is extremely accurate (e.g. right to a healthy environment, right to water, et al.); the problem is the absence of the demonstration of criticism present in a series of judgments. The authors point out that “Two judgments delivered in 2020 illustrate that the jurisprudence of the Court on Article 26 is far from stabilized. The dissenting / concurring opinions expressed by almost all judges of the bench indicate that the issue of using or not using Article 26 as the legal basis of economic, social, and cultural rights is one of the most discussed and controversial of the period”. However, the authors seem to be absent from the commentary on this article, both in defense and in criticism of the Court. How to interpret this position?

The analysis of dilemmas such as the use of article 26 is present in several articles of the work. These cross-references are a key strength of the volume, and allow the article-by-article format to breathe. The book is unquestionably already part of the canon on the inter-American system and will help scholars and practitioners alike think about the different problems faced by the system and the challenges in the rigorous implementation of the Convention.